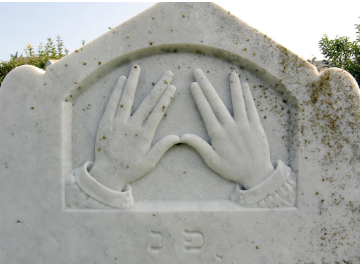 I know, I have written about it previously. But each time Rabbi David and I continue to be in awe that there is never a Torah portion by accident.

Each B’nai Mitzvah child is meant to receive a specific one!

This time I initially didn’t know the child that well. The family lived out of town and had been referred to us. I didn’t think we could help as we weren’t available on the date that was already planned for the child’s Bar Mitzvah. I remember being surprised that the mother changed the date without even meeting us. It wasn’t until later that I understood why the new date was so important, of G-d’s hand at work. It meant the child would receive the specific Torah portion of Naso containing the Priestly Blessings.

When I spoke to the mother I learned the family’s story, that her husband had died a little more than seven years ago. The first thing her husband said after learning he had cancer was that he just wanted to see his sons each become a Bar Mitzvah. “Of all the things he could have said!” the mother told me. After her husband died, the mother made sure her two boys received their Jewish education through a day school and that the family remained active in their local synagogue.

When it came time for the child to write his speech explaining the Torah portion I excitedly shared how Spock from Star Trek took his Vulcan greeting from the hand position used during the Priestly Blessings. Leonard Nimoy had grown up in a traditional synagogue where the Kohanim, the descendants of the Priestly Tribe would bless the congregation using this specific hand position.

The child told me he really didn’t watch Star Trek but he knew his dad loved it. He also told me his dad was a Priest, a Kohen. “Oh, that means you are too!” I told him. (see Rabbi David’s explanation below) At that point I began to get goosebumps along with the message to pay attention, something is important here! I told the boy, “There is never a Torah portion by accident. G-d wanted you to have this one which is all about the Priests!”

As soon as the lesson was over the mother called. She had sat in on the lesson and was still flooded with chills. “I have to send you a picture.” she said. It was of her husband’s tombstone. The hand symbol of the Kohanim was engraved on it. 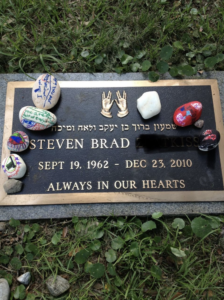 I always wonder how G-d manages to arrange these things. What are the chances that out of the whole year, this is the Torah portion the boy received, the only one with the Priestly Blessings! And quite honestly, even though it is a custom, despite all the funerals we have officiated I have never seen a tombstone engraved with the hand symbol of the Kohanim!

When it came time to give his speech during his service, the boy explained that he knew his father was sending him a message through his Torah portion, that he was always watching over him. I caught Rabbi David’s eye. He too felt the strong presence of the father in the room.

As with any life cycle event there is always “stuff” that comes up within families that needs to be processed. In this case it once again brought up the grief of the father’s death. But there was also healing and it came through the Torah portion’s message. It was such a beautiful message from beyond! A message from a father saying Love never dies…

Information about the Kohanim from Rabbi David When G-d instructed Moses to dedicate several families from the tribe of Levi as priests, (“Kohanim” in Hebrew) they were given the responsibilities of overseeing the carrying of the holy tent and the holy vessels such as the holy lamp, ark and other ritual objects during the forty years of wandering in the desert. They were also entrusted with conducting all the sacrificial rituals which were quite elaborate.

During the time of the First Temple built by King Solomon as well as during the Second Temple, many Kohanim actually lived in the Temple itself and conducted all the daily, Shabbat and holiday rituals. Many others lived among the tribes of Israel and became instructors of the Torah laws, making sure that the rituals were followed precisely. For example, Prophet Jeremiah came from a family of priests who lived in the Galilee city of Anatot.

It is quite amazing that for the past 2,000 years the Jewish priesthood has been passed from father to son for countless generations. In modern times, since we have no Temple, animal sacrifices are of course out of the question and ritual practices are officiated by rabbis who are not necessarily priests, the function of the modern day Kohanim is limited. In synagogues they are called to bless the Jewish people with the Priestly Benediction and also are part of a ceremony in the home called a pidyon haben, the redemption of a first born son so he is relieved from the requirement as serving as a priest.

Although there are Kabbalistic explanations of why the specific hand position is used for the Priestly Blessing most people only know the tradition goes back to Temple times. The special blessing they recite was actually commanded in the Torah. G-D dictated to Aaron, Moses’s brother, the exact text of the blessing. When blessing the congregation at the end of the service the Kohanim cover their entire body with their Tallit first, then they spread their fingers and offer the blessing. It is important not to add or subtract from the text and to recite it exactly as written in the Torah. 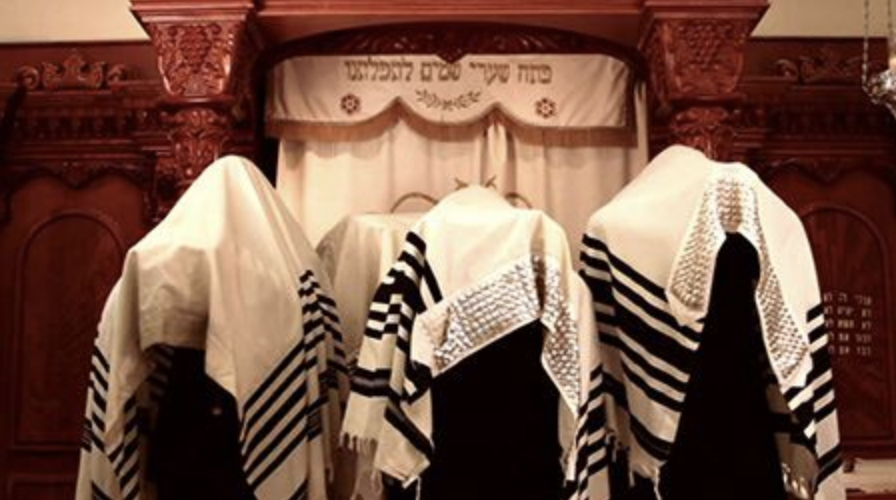 The English translation of the blessing is:

May G-d bless you and guard you

May we all receive these blessings in our daily lives, 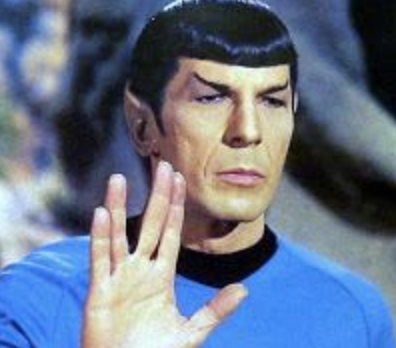 Leonard Nimoy noted that “most people to this day still don’t know” the history of the greeting, although he repeatedly and enthusiastically shared its origin.

Laughing, Nimoy revealed the best part of it all: “People don’t realize they’re blessing each other with this!”