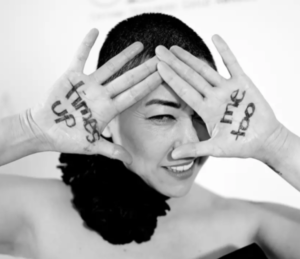 Thursday, March 8 is International Women’s Day, but 2017 and 2018 could each arguably be called the year of women.

The groundbreaking anti-sexual assault and women’s empowerment movements #MeToo and Time’s Up upended the public conversation about women’s issues around the world, and elevated the global consciousness surrounding the obstacles women encounter in their daily lives, both personal and professional.

The #MeToo movement has become a worldwide phenomenon, searched for on Google in 196 countries in the past year. The culture shift has been palpable — for the first time ever, the world has been put on notice that these once-fledgling women’s movements were not to be ignored. And people started to listen.

TIME magazine named The Silence Breakers as the 2017 Person of the Year, honoring not one individual, but all of the women involved – and the cause as a whole. By shining a light on the women whose efforts got the movement off the ground, TIME acknowledged the profound influence of women like Rose McGowan and Ashley Judd on the year’s news, and their unprecedented ability to enact rapid change.

Although they overlap, there are distinct differences between the #MeToo and Time Up’s organizations and the movements fueling their formation.

TIME spoke to #MeToo founder Tarana Burke and Christy Haubegger, a Creative Artists Agency executive who helped start Time’s Up, about what they see as the similarities and differences between their two organizations.

What is the #MeToo movement?

“This is a movement that deals specifically with sexual violence,” Burke said. “And it is a framework for how to do the work of ending sexual violence.”

The #MeToo movement had already been around for years before it started gaining national attention after allegations of sexual assault and harassment by Hollywood producer Harvey Weinstein began dominating the headlines.

“We are doing it from a framework that’s central to survivors, and to make sure the most that marginalized among survivors have access to resources that will help them cross the human journey.”

Although the #MeToo movement had already been around for years, it finally gained national attention after allegations of sexual assault and harassment by Hollywood producer Harvey Weinstein started a crusade within the industry to speak out.

By focusing on healing and survivorship, Burke hopes to create a community of survivors who move forward together. Right now, they are working on scaling up their organization and resources to meet the outpouring of demand they are experiencing. Their goal is to continue adding more resources for survivors by “providing leadership training and development, and guidance for the community around community action.”

And Burke wants people to understand that the MeToo movement is more than just a hashtag. It is, she says, “the start of a larger conversation” and a space for “community healing” for all.

#MeToo is about giving people a voice. The movement wants to a see a cultural transformation by “encouraging millions to speak out about sexual violence and harassment,” according to the movement’s website. The site describes one of #MeToo’s motto’s as “empowerment through empathy,” because the founders believe it is crucial for survivors of sexual abuse to understand that they are not alone.

Creating a community of those survivors is what #MeToo plans to accomplish as it marches forward towards its ultimate goal, which it says is “disrupting all systems that allow sexual violence to flourish.”

The direct community action and emphasis on healing highlight the differences between #MeToo’s goals and Time Up’s. While #MeToo explicitly deals with sexual violence of all kinds, Time Up’s is focused more so on workplace equity and creating equal economic opportunities for women and people of color — and combating sexual harassment and assault is just one of the many ways Time Up’s are working to end widespread employment disparities.

Who started the #MeToo movement?

#MeToo was started by activist Tarana Burke after she had a conversation with a 13-year-old girl who opened up to her about the sexual abuse she was experiencing at the hands of her mother’s boyfriend, according to the New York Times. A decade later, in 2006, Burke founded the non-profit Just Be, Inc., an organization that supports victims of sexual misconduct, with a focus on young girls of color.

On Oct. 15, 2017, it took off on social media and became a global sensation – thanks to one tweet. Actress Alyssa Milano, unaware of the origins of #MeToo at first, told her followers: “If you’ve been sexually harassed or assaulted write ‘me too’ as a reply to this tweet.” More than 66,000 users replied and the tweet kicked off an online tidal wave overnight as women flooded social media with their stories of being harassed and abused – using the #MeToo hashtag.

Milano herself was initially unaware that Burke had originally coined the term “Me too,” but within days of being made aware of Burke’s activism, the actress went on Good Morning America to publicly show support and gave Burke credit. 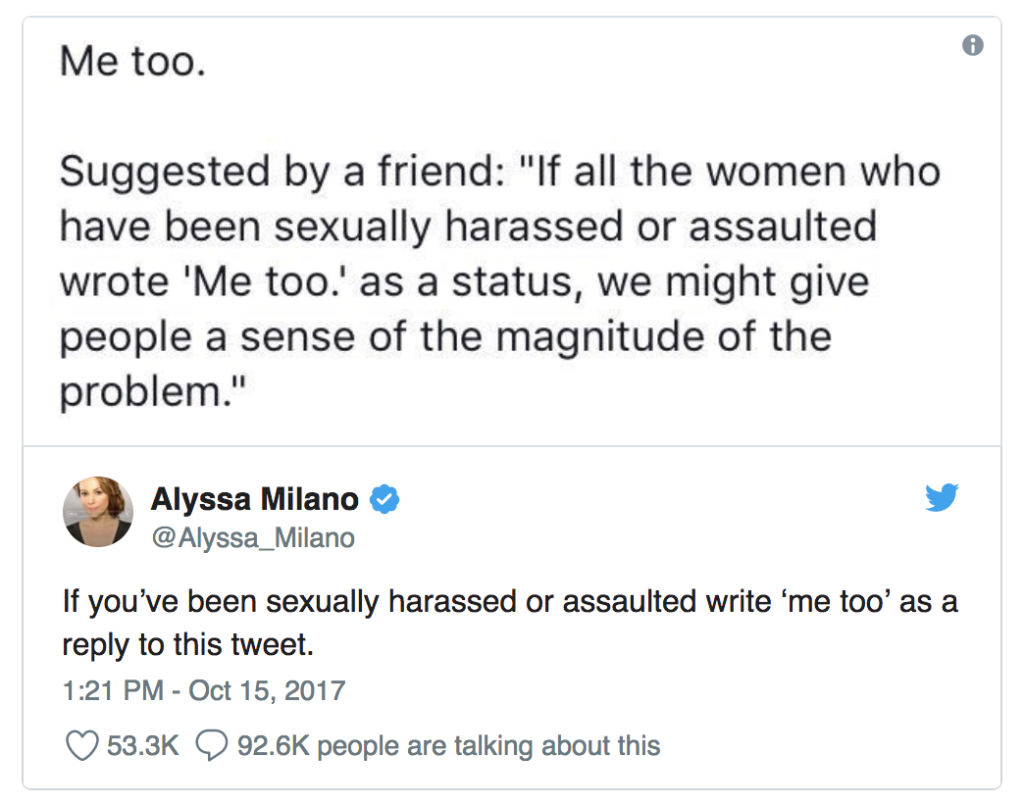 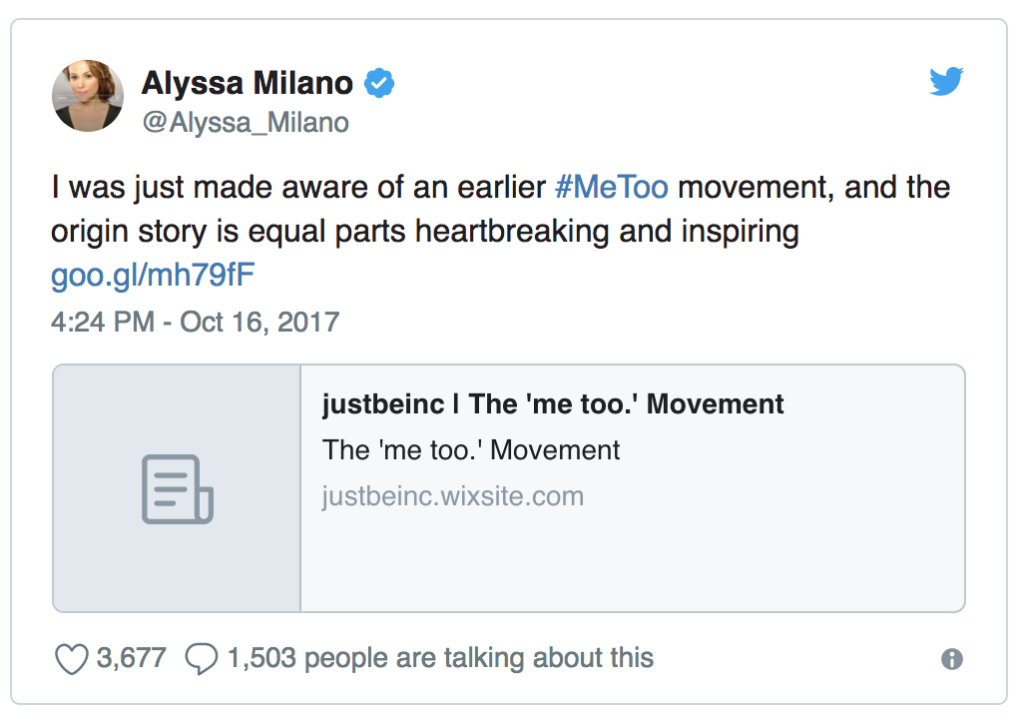 Journalists like Ronan Farrow at the New Yorker and Jodi Kantor at the New York Times also helped push the #MeToo conversation forward with dedicated investigative journalism that brought to light numerous sexual misconduct stories. They were an integral part of outing abusers like Weinstein in painful, but important pieces of journalism.

The rest of the world took over from there.

What is the Time’s Up movement?

Time’s Up shares a similar vision for women’s empowerment with #MeToo, but it has some different, specific goals. Time’s Up can be thought of as a solution-based, action-oriented next step in the #Metoo movement. The organization’s aim is to create concrete change, leading to safety and equity in the workplace. It was started by a group of over 300 women in Hollywood, with high-profile leaders including Reese Witherspoon, Natalie Portman and Shonda Rimes.

“Time’s Up was founded on the premise that everyone, every human being, deserves a right to earn a living, to take care of themselves, to take care of their families, free of the impediments of harassment and sexual assault and discrimination,” Haubegger told TIME.

Even though Time’s Up is focused on what happens to people in professional realms, she says the organization’s work is really in tribute to Burke and the remarkable work she did for a decade before #MeToo exploded globally.

“We are very specifically focused on what I would call workplace issues. Fairness, safety, equity in the workplace,” she said. “If you were to draw a Venn diagram, #MeToo more broadly is a campaign and a movement around all kinds of sexual assault.”

Why workplace inequality? Haubegger says if you want to eradicate sexual harassment, first you have to solve inequality, because power imbalances are at the root of harassment behavior.

“This is a symptom of a larger, systemic inequality and a systemic pattern of exclusion for women, for people of color, and a lack of equilibrium in the power distribution in our business,” Burke told TIME. “If you want to solve sexual harassment, you actually needed to solve all of those things. So we decided to really focus on that aspect.”

The group’s focus is getting legislation passed and policies changes. Organizers want to see the passage of laws for gender parity issues such as equal pay and equal work environments – as well as increased opportunities, particularly for women in low-wage industries and women of color. To fund this goal, they created the Time’s Up Legal Defense Fund, which is a source of legal and financial support for women and men who want to fight sexual misconduct through the justice system.

The legal fund, which is managed by the National Women’s Law Center, is the most successful campaign GoFundMe has ever seen, collecting an incredible $21 million in just two months.

Most male and female celebrities dressed in all black and sported Time’s Up pins at The Golden Globes in January, but when it came to time to reaching for their wallets it was the women who stepped up. A significant majority of the largest donations to the group’s legal fund come from high-profile women in Hollywood.