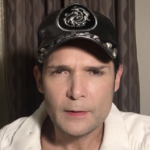 Corey Feldman has created a new INDIGOGO campaign, but this time its not to raise $ for an album, or tour, but it is about something much more important. Corey is attempting to make his life story into a Major Motion Picture.

His idea was created in response to the tens of thousands of comments he receives urging him to come forward with details about his abusers while growing up as a child in the industry.

The plan is simple, donate now, get the answers you seek, while affording him the ability to protect his family, and cover the legal costs while he prepares to take a stand against the sick and twisted power mongers in the world of Entertainment and beyond.

Corey Feldman has been exposing what many believe to be the number one problem in Hollywood today, and that’s child pedophilia sex rings. He’s not the only one who’s been doing so, as many powerful figures have been implicated in this behaviour by actors of all ages and genders. From military and political elite to Hollywood executives, it’s a serious issue that needs more attention.

For example, in 2005 U.S. congresswoman Cynthia McKinney grilled Donald Rumsfeld on private military contractor DynCorp’s child trafficking business of selling women and children. Not long ago, retired army general James Grazioplene, who worked in the Pentagon and as the Vice President of DynCorp, was hit with six rape charges of a minor.  You can read more about that here.

For years Ted Gunderson, a former FBI special agent and head of their L.A. office, has been exposing high-level pedophilia, sexual abuse, and satantic rituals that are so commonly performed by members of the global elite. You can read more about that and watch one of his lectures here.

The examples are endless, and even some cursory research will reveal just how big this problem is.

So, as you can see, this is nothing new, but so few are speaking out about it for fear of reprisal, which is why it’s so important to acknowledge Corey Feldman’s story, and his bravery for sharing it.

A few days ago, Feldman was arrested for marijuana possession — just days after speaking out on Hollywood child sexual abuse (you can read about that here.) He made it clear that he would not be naming any names because he doesn’t want to put himself or his family at risk. He’s stated multiple times that he is a target, and these powerful people within Hollywood are desperately trying to silence him.

“I told everybody a few days ago that I had a plan to try and hopefully bring to light what is happening in the world of entertainment as far as perverts and pedophiles. . . . Ever since I even discussed the fact that I had this plan, my life has turned into utter chaos. . . . I’ve experienced things like never before. I mean, I’ve been silenced my whole life, but just over the past few days since I made that announcement, I’ve been arrested, I had a near-death experience last night where I felt like I was almost going to be killed, two trucks came speeding at me at the same time on a crosswalk. And then several of my band members decided to quit because they’re afraid for their lives. . . . I’m very alone, but I need to protect myself, and I need to protect my family, I need additional security, and I need a legal team to help represent me so that I can fulfil this mission.

“What I am proposing is a plan that I believe can literally change the entertainment system as we know it, and I believe that I can also bring down, potentially, a pedophile ring that I’ve been aware of since I was a child. Right off the bat I can name six names, one of them who is still very powerful today, and a story that links all the way up to a studio. It connects pedophilia to one of the major studios. I am very afraid to do this, it’s not easy.”

We can help Corey by listening to his story, raising awareness, and making sure this information reaches enough people that, if he or his family were ever attacked, everyone would know why.

https://www.indiegogo.com/projects/co…
An Invocation
I invoke Sanat Kumara
and the Universal Laws of Intent,
As Above So Below, As Within So Without, Balance,
Change, Transmutation,
Instantaneous Transmission and Transformation,
Karmic Dispensation, Elimination,
and Completion and Continuity
for child pedophilia, abuse,
control in the movie industry.