With thanks to Linda for drawing my attention to the Amazon information.

The second post says that “an undercover investigation by the Sunday Mirror newspaper has exposed brutal working conditions” at one of Amazon’s warehouses in England.

We can send Love to Jeff Bezos, to Amazon and his warehouses, those around him, and at the same time be the change ourselves — detaching from the old ways because they do not work — creating the new.

Archangel Gabrielle talked to me through Linda Dillon, May 2012, saying how we think, feel, deal with, and consider money will change:

“Finances and what money, or exchange of resources for lack of a better term — because you know that that currency issue is going to shift, several times — and the Divine Feminine perspective on that, on unity, on community, on sharing, on what is possible and what is created is very different than the paradigm that has been in place for thousands and thousands and thousands of years upon your planet.”

Innovative action on the political level and from the ground up — taking care of each other in community — has already started as can be seen in the other encouraging posts below.

Sanat Kumara tells us on the latest An Hour With An Angel we are here to create the change from within:

I can’t recommend this enough — especially calling on the Mighty Ones with their Flames, St. Germaine and the Violet Flame, Sanat Kumara and Universal Law — morning meditation.

We are the change and it begins within, in trust that all is in Divine Order and always has been, in forgiveness of everything.

that place of balance,

and do remember to hold the highest vision

Much gratitude to all participating!

The rise of the $100 billion man is a further milestone in the unprecedented growth of social inequality worldwide. Bezos’ wealth would make the robber barons of the 19th century green with envy.

In November, the Institute for Policy Studies found the three wealthiest billionaires owned as much as the poorest half of the United States. Thanks to Bezos, this study is already out of date, because the billionaire increased his wealth by roughly $20 billion since its publication. Worldwide, the five richest billionaires own as much wealth as half the world’s population, some 3.5 billion people.

Bezos acquired his wealth through the exploitation of his 300,000-strong international workforce. Amazon workers make as little as $233 per month in India, to an average of just $12.40 an hour in the United States. Workers toil for long hours with minimal safety protections, very limited benefits, and often in temporary or “flex” positions. In September, when 59-year-old Phillip Terry was crushed by a forklift at an Amazon facility near Indianapolis, the Department of Labor said the company might be forced to pay $28,000 in fines. Bezos makes this much each minute, more than his US employees make in a full year.

The company demands tribute from governments worldwide, requiring billions in tax breaks and free handouts in exchange for building its warehouses. Amazon is bringing back the “company town” of the late 19th century. It has forced over 200 American cities into a bidding war to lure the company’s second headquarters with massive handouts. Chicago, for example, offered Amazon a $2.25 billion “incentive package,” while Stonecrest, Georgia’s city council voted to change its name to “Amazon” and appoint Bezos as “mayor for life” if the company grants them the second headquarters. . .

The article goes on to say:

The UN estimates that it would cost $30 billion to solve world hunger by providing 862 million people with food for a year. The World Health Organization claims just $11 billion is needed to halve the number of people without access to clean water. Another UN study found that $26 billion would provide education to every child that does not receive one.

The Guttmacher Institute estimates that with $13 billion, free maternal and prenatal care could be provided for every mother in the developing world. It would cost $11 billion to house each of the 150,000 people who are homeless on a given night in the US. The cost of preventing 4 million malaria deaths would be $6 billion each year.

The total cost for these essential changes would be roughly $97 billion.

An undercover investigation by the Sunday Mirror newspaper has exposed brutal working conditions at Amazon’s warehouse in Tilbury, in southern England.

A reporter from the newspaper, Alan Selby, spent five weeks working at the “fulfilment centre”, which opened a few weeks ago and is the biggest warehouse of its kind in Europe. The four-storey plant occupies 2.2 million square feet — the size of 11 football pitches — and employs 1,500 workers. 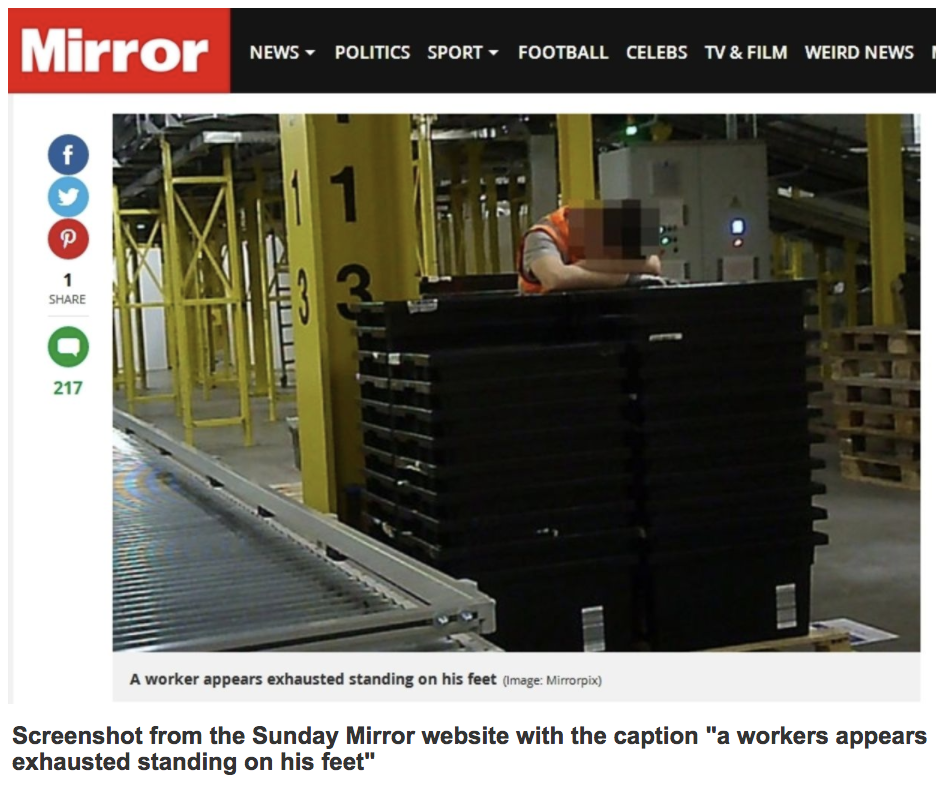 Selby used a concealed camera to take video footage and photos of exhausted workers slumped at their work stations, while he himself was under constant pressure to increase his workload. He worked 10.5 hour shifts, with just two 30 minute breaks, for £8.20 (US $10.92) an hour —just a few pence above the £7.50 (US $9.99) minimum wage.

Selby explained, “Two half-hour breaks were the only time off my feet, but it was barely enough time to race to the canteen and wolf down some food to keep my energy up.”

Describing his workday, Selby wrote, “Alone in a locked metal cage, 10 feet from my nearest colleague, a robot approaches from the shadows and thrusts a tower of shelves towards me. I have nine seconds to grab and process an item to be sent for packing–a target of 300 items an hour, for hour after relentless hour.”

He reports how a computer screen in front of him gave constant reminders of his “units per hour” and exactly how long each has taken. Workers are given impossible targets under threat of being sacked. Breaks are timed and people are so exhausted that they fall asleep. Three of the photos in the exposé show workers slumped at their workstation, with one woman described as being asleep. Exhausted workers are warned about the consequences of even sitting down.

Capitalism Is Not the Only Choice

We have opportunities every day to build economies that lift each other up and spread joy.

Since the breakup of the Soviet bloc and China’s turn toward free markets, many economists have pronounced an “end of history,” where capitalism reigns supreme as the ultimate form of economy. Perhaps “there is no alternative” to a globalized neoliberal economy, as former British Prime Minister Margaret Thatcher often said. Indeed, free markets in which individuals compete to get what they can while they can are glorified in popular culture through reality shows such as Shark Tank.

But many of us in the 99 percent are not feeling so happy or secure about this economy’s results. Many are working harder and longer just to maintain housing and keep food on the table. Even the college-educated are mired in student debt, keeping the American Dream beyond their grasp. And then there are those who have never been served well by this economy. African Americans were liberated from enslavement only to be largely shut out of “free” market opportunities. Immigrants continue to work in the shadows. Women still earn only about three-quarters of what men make for the same work.

So, are we trapped in capitalism?

‘Happiness Fund’ to Help Pay Debts
For Up to 1.6m Koreans

South Korea is to write-off the debts of as many as 1.6 million people in a move designed to ease the financial burden on low-income individuals. 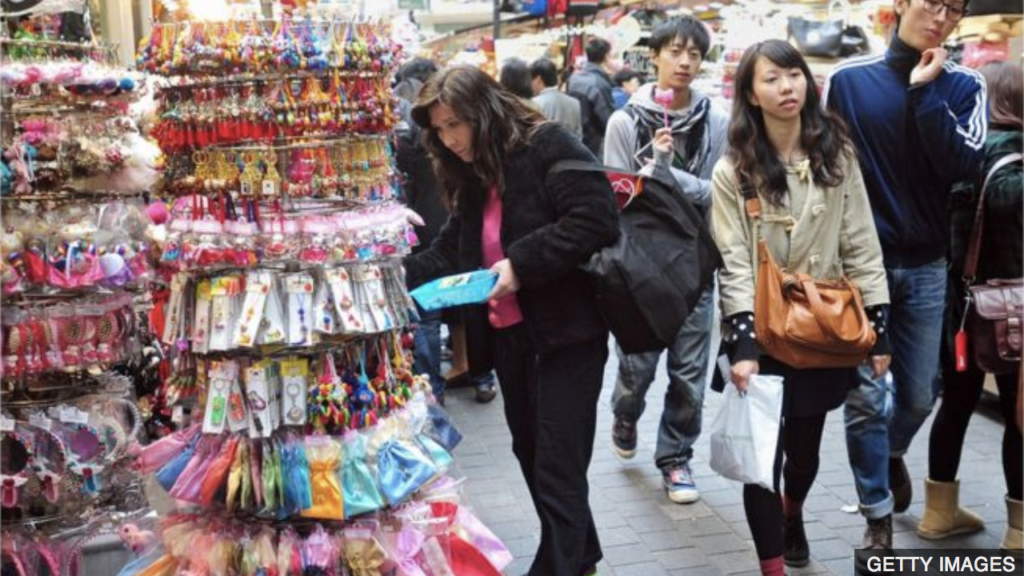 Eligible people can apply to the government for debt relief from next February.

They will be paid in part out of the government’s “National Happiness Fund”, set up to help troubled borrowers.

To qualify for the scheme, individuals must prove they earn a monthly income of less than 990,000 won ($910), and show they have struggled to pay back the debt for more than a decade.

The plan could clear as much as 6.2 trillion won in bad debts.

The country’s Financial Services Commission, which will administer the scheme, said the policy was designed to help individuals make a fresh start by relieving their debt burdens.

The debts will be written-off in part through funds sourced from other lenders, and through the National Happiness Fund.

The Happiness Fund was established in 2013 to help the poorest Koreans manage their debt. The scheme was a key campaign pledge of the former South Korean president, Park Geun-hye, who vowed to tackle growing inequality in the country.

Since it was founded, the fund has provided 6.8 trillion won in debt restructuring.

“It is a unique form of Confucian capitalism, whereby the state is often viewed as a patriarchal protector of the people,” Mr Kim said.

He said household debt was a significant issue in South Korea. But Mr Kim added the scheme “does not directly address the higher levels of individual debt incurred by middle and higher-income households”, which may be more of a concern for policymakers.

It comes amid signs of growing strength in the South Korea’s economy, Asia’s fourth largest. The country’s central bank raised interest rates for the first time in more than six years on Thursday, removing emergency stimulus in place since 2012 to boost the economy.

The government expects the economy to expand by more than 3% this year, up from the 2.8% average growth rate for the past five years.

Writing Love with St. Germaine and the Torch of the Violet Flame

I invoke Sanat Kumara
and the Universal Laws of Change
Transmutation and Elimination
for the old ways of the financial system.

(1) “An Hour With An Angel: Sanat Kumara on Creation, Universal Law, and the Divine Qualities,” November 29, 2017, channeled by Linda Dillon for the Council of Love, http://inlightuniversal.com/ahwaa-sanat-kumara-on-creation-universal-law-and-the-divine-qualities/