Calling all meditators to hold the highest vision for all war, all military operations not of love, also for the growing of poppies for street drugs, around the planet.

Mapping a World From Hell

Excerpted from a post by Tom Engelhardt, TomDispatch, January 4, 2018

A glance at the map (below) tells you that the war on terror, an increasingly complex set of intertwined conflicts, is now a remarkably global phenomenon.  It stretches from the Philippines (with its own ISIS-branded group that just fought an almost five-month-long campaign that devastated Marawi, a city of 300,000) through South Asia, Central Asia, the Middle East, North Africa, and deep into West Africa where, only recently, four Green Berets died in an ambush in Niger. 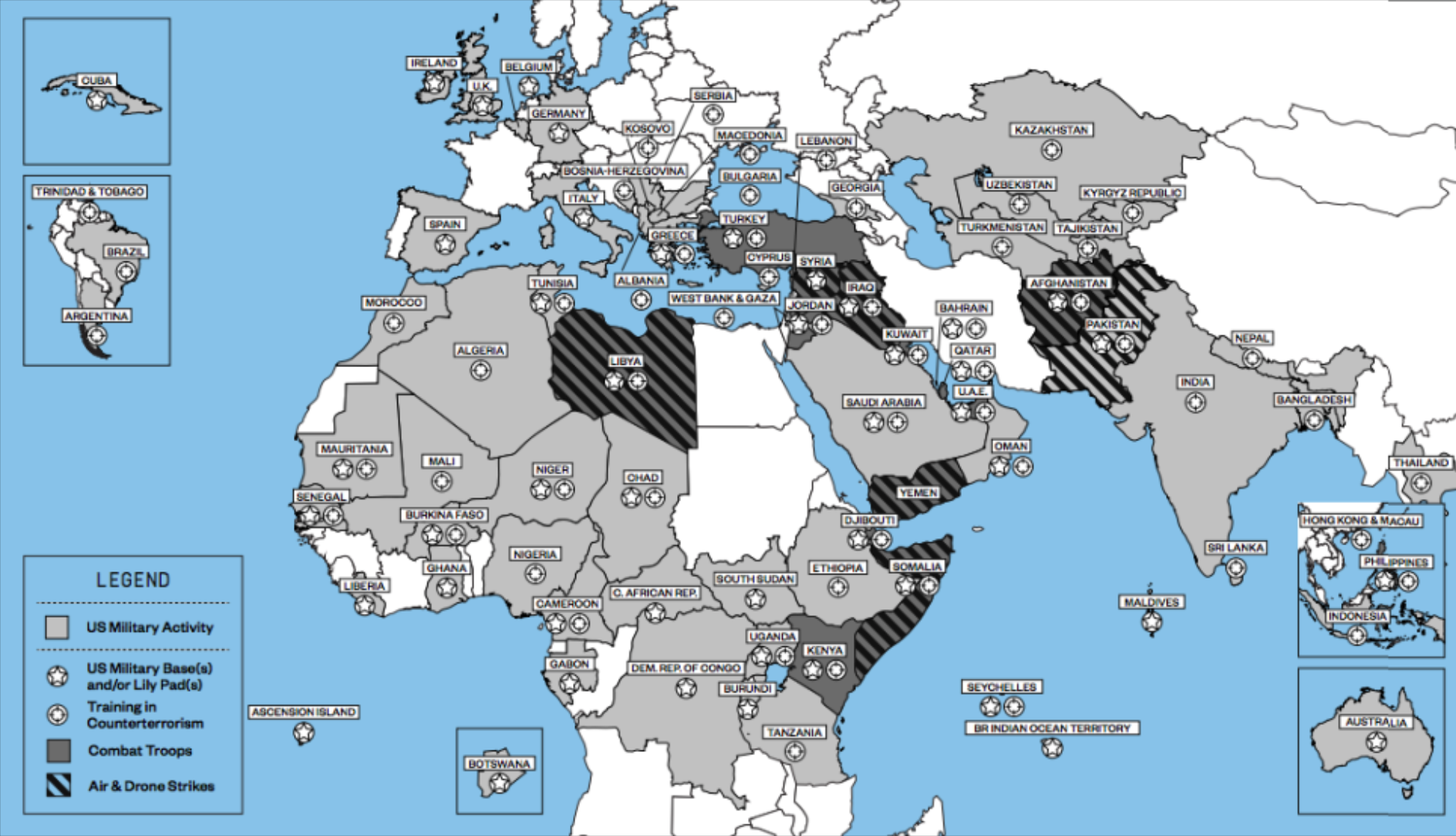 This map was produced by the Costs of War Project at Brown University’s Watson Institute for International and Public Affairs.

No less stunning are the number of countries Washington’s war on terror has touched in some fashion.  Once, of course, there was only one (or, if you want to include the United States, two).  Now, the Costs of War Project identifies no less than 76 countries, 39% of those on the planet, as involved in that global conflict.  That means places like Afghanistan, Syria, Iraq, Yemen, Somalia, and Libya where U.S. drone or other air strikes are the norm and U.S. ground troops (often Special Operations forces) have been either directly or indirectly engaged in combat.  It also means countries where U.S. advisers are training local militaries or even militias in counterterror tactics and those with bases crucial to this expanding set of conflicts.  As the map makes clear, these categories often overlap.

Who could be surprised that such a “war” has been eating American taxpayer dollars at a rate that should stagger the imagination in a country whose infrastructure is now visibly crumbling?  In a separate study, released in November, the Costs of War Project estimated that the price tag on the war on terror (with some future expenses included) had already reached an astronomical $5.6 trillion.  Only recently, however, President Trump, now escalating those conflicts, tweeted an even more staggering figure: “After having foolishly spent $7 trillion in the Middle East, it is time to start rebuilding our country!” (This figure, too, seems to have come in some fashion from the Costs of War estimate that “future interest payments on borrowing for the wars will likely add more than $7.9 trillion to the national debt” by mid-century.)

It couldn’t have been a rarer comment from an American politician, as in these years assessments of both the monetary and human costs of war have largely been left to small groups of scholars and activists.  The war on terror has, in fact, spread in the fashion today’s map lays out with almost no serious debate in this country about its costs or results.  If the document produced by the Costs of War project is, in fact, a map from hell, it is also, I believe, the first full-scale map of this war ever produced.

From Poppy to Heroin:
Taliban Move into Afghanistan Drug Production 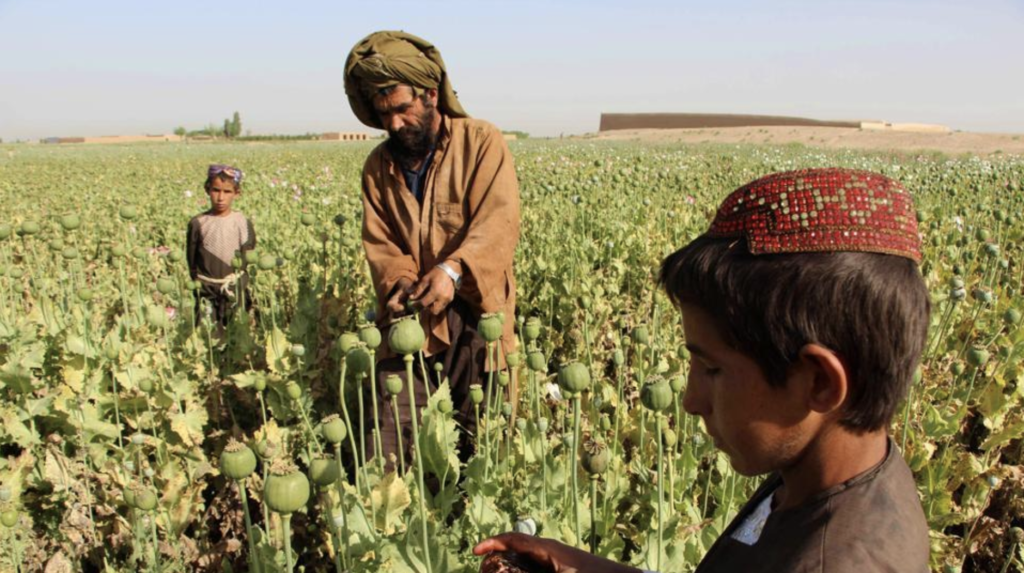 (FILES) This file photo taken on April 11, 2017 shows Afghan farmers harvesting opium sap from a poppy field in the Gereshk district of Helmand. The Taliban — which banned poppy cultivation when it ruled Afghanistan — now appears to wield significant control over the war-torn country’s heroin production line.(AFP)

The Taliban — which banned poppy cultivation when it ruled Afghanistan — now appears to wield significant control over the war-torn country’s heroin production line, providing insurgents with billions of dollars, officials have told AFP.

In 2016 Afghanistan, which produces 80 percent of the world’s opium, made around 4,800 tonnes of the drug bringing in revenues of three billion dollars, according to the United Nations. 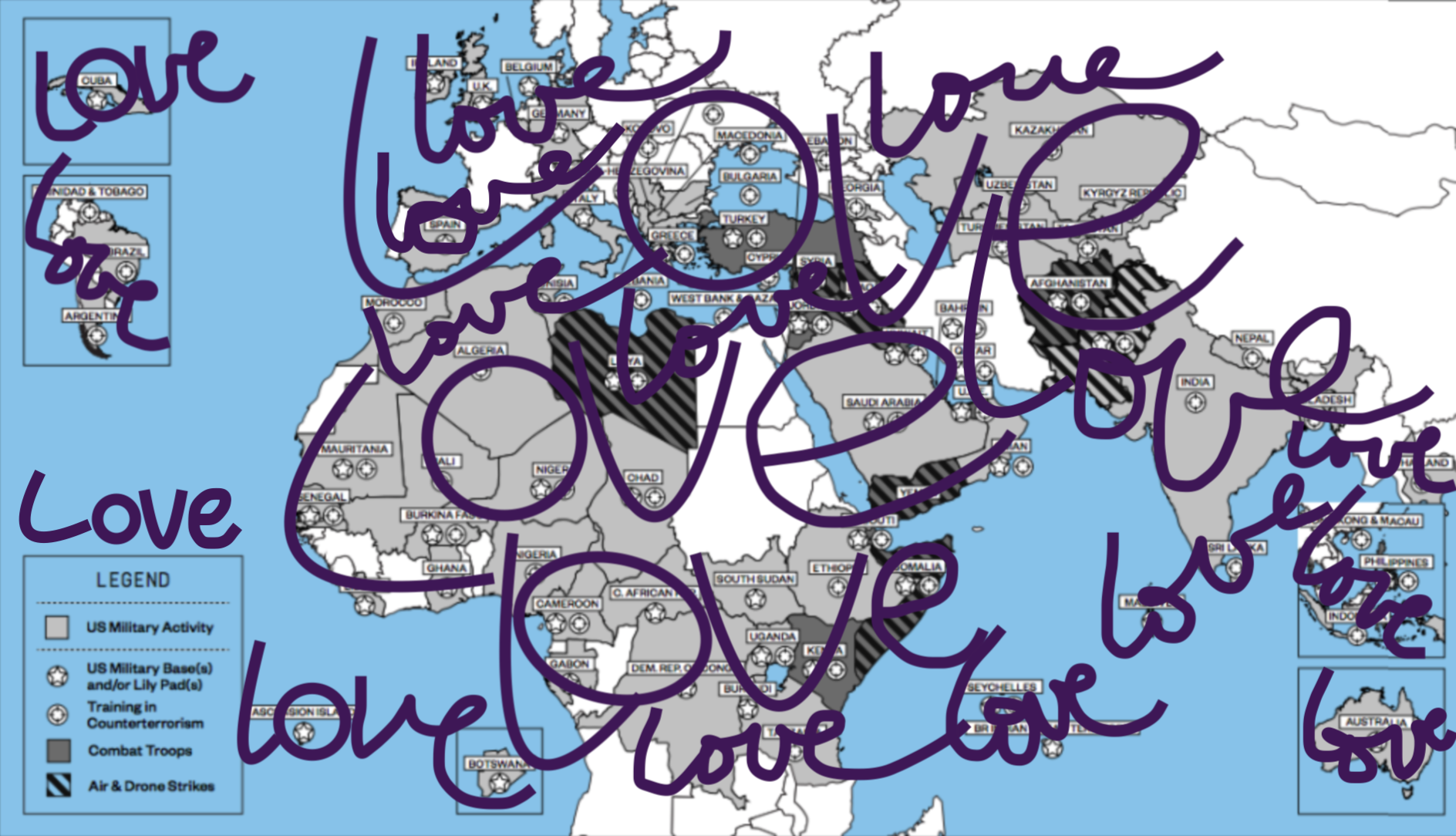 WRITING LOVE WITH ST. GERMAINE AND THE VIOLET FLAME

I invoke Sanat Kumara
and the Universal Law of Elimination
for all global military operations not of love.

The Mother’s Blue Diamond energy of hope, LOVE AND PEACE