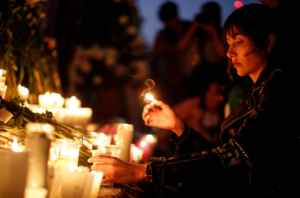 A woman holds a candle in protest in Mexico City, February 22, 2020, Reuters

In quiet protest of gender violence, many women plan a one-day retreat from public life March 9.

By the Monitor’s Editorial Board, Christian Science Monitor, February 27, 2020

On March 9, much of Mexico will become very quiet.

The silence, in fact, is meant to be full of meaning, like a purposeful pause that provokes the conscience.

On that date – coming a day after International Women’s Day with all of its street demonstrations worldwide – millions of women and girls in Mexico plan to simply withdraw from all public life.

Known by the hashtag #UnDiaSinNosotras (#ADayWithoutUs), this 24-hour retreat from schools, workplaces, stores, public transport – even the internet – is not really a national strike. It is backed by the government and many businesses. Much of the male-dominated establishment actually supports the purpose of this mass nonaction: a mute rejection of femicide or other violence against women because they are women.

In a statement, Mexico’s Business Coordinating Council urged companies to allow female workers to stay home in hopes that everyone would support solutions to the problem. “We have all failed as a society,” the statement read.

Mexico still has one of the world’s highest rates of gender-based violence, which stands in contrast to its progress in other areas, such as more female political leaders. (About half of the president’s cabinet are women while Mexico City has its first elected female mayor.) In addition, about 90% of femicides do not result in a conviction, according to Mexico’s National Human Rights Commission.

Past protests against femicide have done little to change attitudes in Mexico despite laws to prevent such violence.

Women’s groups organizing the “stay home” day decided that an alternative tactic was necessary. They hope the withdrawal and silence of women will speak louder than angry demonstrations.

There is a good precedent. In Iceland 45 years ago, 90% of women took a “day off” from both work and housework to protest the low representation of women in government. Their one-day absence made men’s hearts grow fonder. The country began to implement egalitarian policies. Five years later, Iceland became the world’s first country with a democratically elected female president.