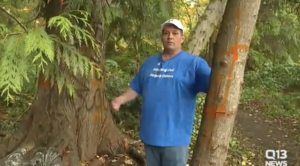 EVERETT, Wash. – A local non-profit is taking measures into its own hands to fight homelessness while trying to curb Washington’s substance abuse and opioid epidemic.

This came after the Washington State Attorney General’s office held a summit over the summer at the University of Washington to address the growing need to understand and fight illegal opioids and substance abuse.

On Monday, the Hand Up Project wrapped up four days of intensive clean up, tearing down and clearing out illegal homeless camps in a seven-acre area behind Home Depot off Highway 99 in South Everett.

“Unless you can understand what these people – what we went through – it’s really difficult for anybody to listen,” said the nonprofit’s founder, Robert Smiley.

For the self-proclaimed former “crackhead,” resources weren’t the issue: It was the connection to them.

“That’s where I slept. That and that little pit there,” said Smiley, surveying the cleanup efforts Monday.

The transformation from Friday was unbelievable.

The non-profit founder abused drugs for 22 years before assaulting a police officer, slitting a cop’s throat in an armed robbery in 1986.

“I spent most of my life in prison,” said Smiley. “I was a bad person. I was a liar, a cheating thief.”

Now he has a new mission.

“When I run across people, I see me,” Smiley said.

“We do have to clean up the wreckage of our past,  but as long as we have something in our life that makes us feel like ‘OK, it’s worth me doing this battle, this person needs me.”

People like the dozens of volunteers Smiley has spent years helping. 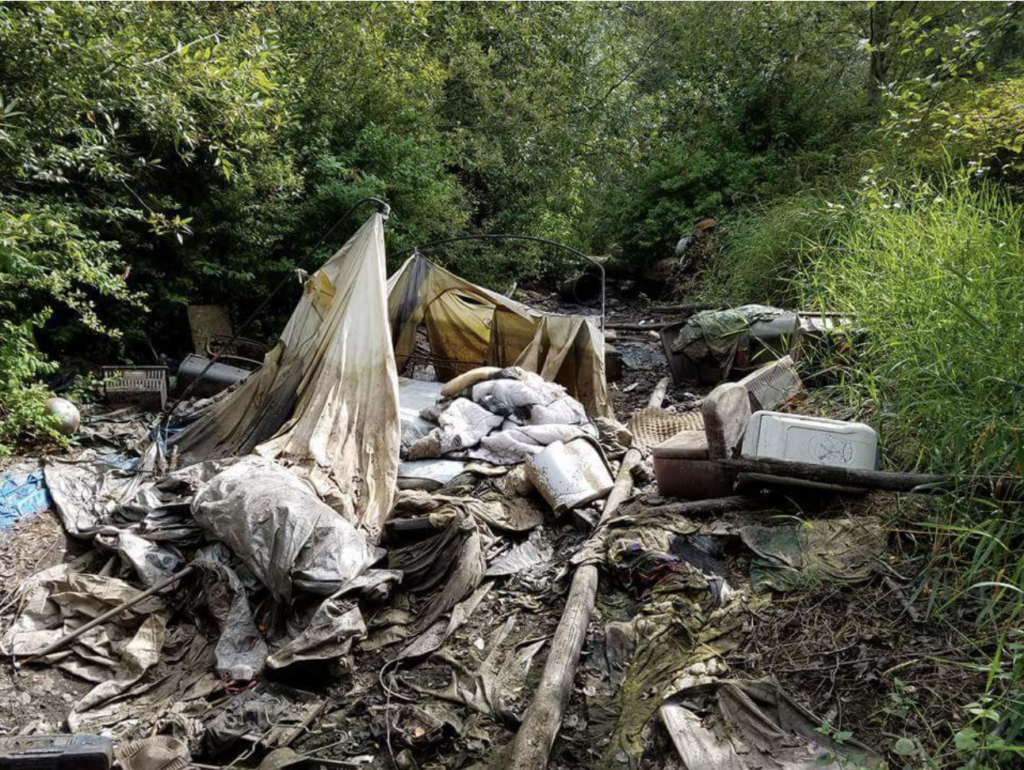 “It’s kind of the old phrase, ‘It takes one to know one’,” said retired Det. Myrle Carner with Crime Stoppers of Puget Sound. “The reality is, because all of these people are former addicts or they have family members that are, they understand the situation, and they understand what they need to be doing.” 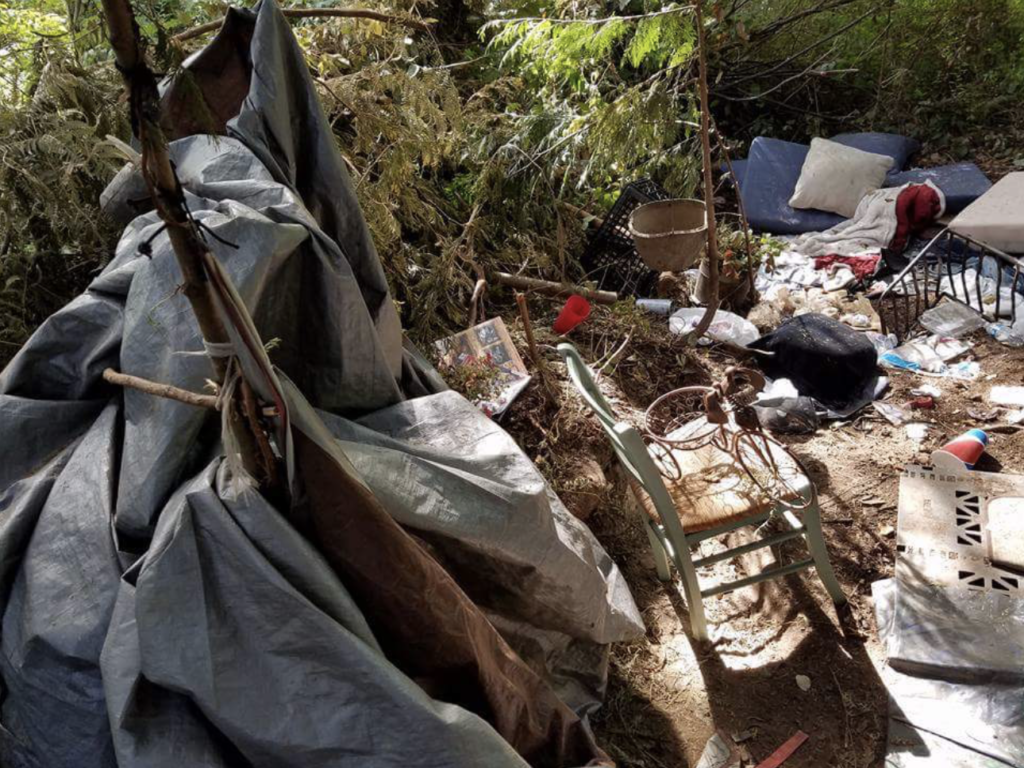 “This whole thing is really out of hand, out of touch, out of control in a lot of ways,”  Carner said of the state’s drug abuse problem. “It’s probably the worst that law enforcement has seen it in decades.”

What separates Smiley’s team is the volunteers, mostly all former addicts now paying it forward to assist in others’ recovery process. The former addicts were the very people dumping out thousands of collected needles and drug paraphernalia in a cleanup BBQ Monday.

“They’re not just talk. They’re doing the walk and I for one appreciate that,” Carner said.

The drugs are the reason Smiley used to visit this Everett encampment in the first place.

“He’s a very open and honest guy,” said Carner. “Is he there yet? Probably not, but he’s sure making great strides and all of these people here are a result of Robert’s help.”

As for the homeless that were living in the camp, many of them don’t have cars to get to services they desperately need.

The non-profit doesn’t just tell them where to go–they will physically drive those willing to accept their help.

Since Friday, The Hand Up Project drove 11 people to detox or out-patient services. 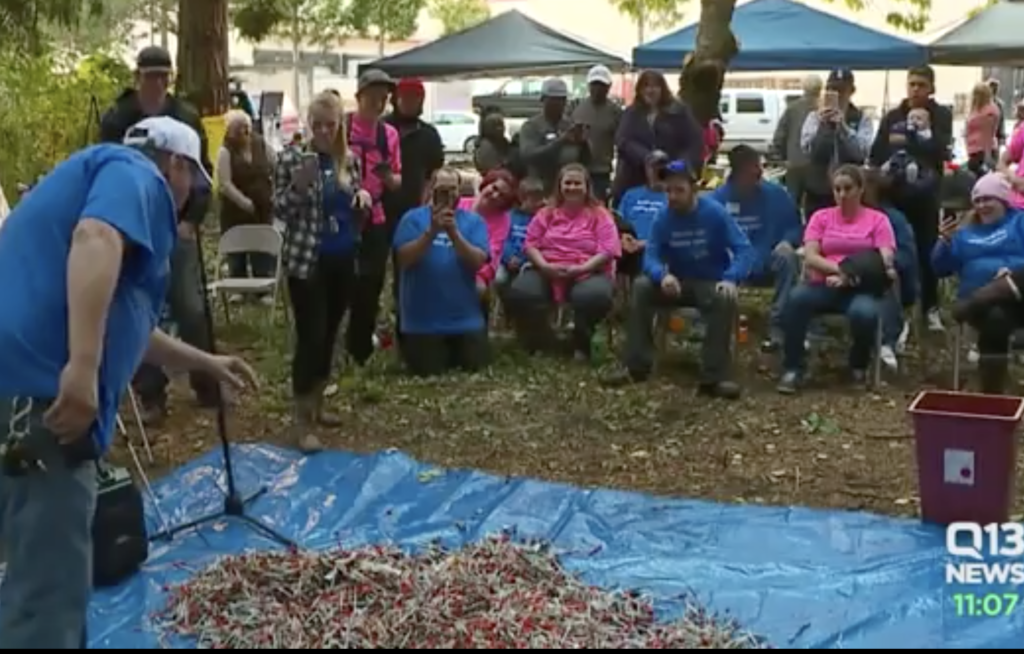 The Hand Up Project

The Hand Up Project is an advocacy group for the homeless and those who suffer from addiction. We are a resource facilitator for safe housing, detox, mental health support, addiction support, and community services.

We work for healthy communities in the following ways:

We provide a hand up to those we serve, supporting them as they work through the underlying issues that were a factor in becoming homeless, and empowering and leading them to contribute back to the greater community.