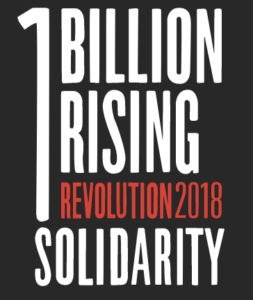 The Vagina Monologues, a play written in 1995 by activist Eve Ensler opened up something we had never seen before, a very public conversation about women’s sexuality and strength, but also of violence, abuse and rape.

Now performed around the world after first running Off-Broadway for 5 years, then touring the US, it has been translated into more than 45 languages.

What Eve found astonishing, was that women lined up after the shows to share their stories of maltreatment, pain and shame.

No stranger to this herself:

“Ensler suffered violence as a girl growing up in Scarsdale, New York. Behind the white-picket-fence façade of her upper-middle class home, her alcoholic father abused her.” (1)

With the success of The Vagina Monologues she felt she had to do something.

Ensler saw the play as a way to champion change so she, along with a group of women sharing the same interest, created V-Day, a global movement to stop violence against women and girls.

The Vagina Monologues to this day is a undertaking to end patriarchal control, the suppression of the feminine.

“On Valentines Day, 1998, Eve, with a group of women in New York City, established V-Day.

“Set up as a 501(c)(3) and originally staffed by volunteers, the organization’s seed money came from a star-studded, sold out benefit performance at the Hammerstein Ballroom in New York, a show that raised $250,000 in a single evening.

“It demands that violence against women and girls must end.

“To do this, once a year, in February, Eve allows groups around the world to produce a performance of the play, as well as other works created by V-Day, and use the proceeds for local individual projects and programs that work to end violence against women and girls, often shelters and rape crisis centers.

“What began as one event in New York City in 1998 today includes over 5,800 V-Day events annually.

“Performance is just the beginning. V-Day stages large-scale benefits and produces innovative gatherings, films and campaigns to educate and change social attitudes towards violence against women.

“V-Day is a global activist movement to end violence against women and girls.

“V-Day is a catalyst that promotes creative events to increase awareness, raise money, and revitalize the spirit of existing anti-violence organizations.

“V-Day started in 1997 an annual event that helps fund groups around the world that fight violence against women.”

“The magnitude of women’s suffering continues to generate creative and political resistance in the One Billion Rising movement like we have never seen before.

“What began as a worldwide creative dance protest is emerging as a collective creative resistance using art and solidarity as powerful tools for protest against all forms of violence.”

“One Billion Rising shows us that women play a crucial role in this resistance, creating solidarity movements, as they lead from the forefront of local, national and international struggles.

“It shows us that women are continuing to organize everywhere, harnessing collective energy, building hope and solidarity, and using creativity and vision as they raise political consciousness in their unwavering and fierce determination towards a future of freedom, equality, respect and dignity.

“Risings are taking place around the globe with a call for solidarity, a call for system change – the change of mindsets, the change of structures, the change in consciousness, awareness and understanding of violence, the change in policies that affect women economically, socially, sexually, physically, emotionally, and the end of the revolving patterns of domination, oppression and exploitation.

“1 in 3 women across the planet will be beaten or raped during her lifetime.

“That’s ONE BILLION WOMEN AND GIRLS.

“Every February through 8 March, Risings take place in hundreds of countries across the world and within local communities.

“Through One Billion Rising, activists worldwide have mobilized, engaged, awakened and joined people across the planet to end violence against women and girls.

“We have made violence against women a global issue, not relegated to country or tribe or class or religion.

V-Day’s History in the Congo from the City of Joy website:

“In December 2006, Eve Ensler interviewed Dr. Denis Mukwege, head of Panzi Hospital about the issue of sexual violence in the DRC.

“Upon Dr. Mukwege’s invitation, Eve traveled to Bukavu and Goma to visit the Panzi Hospital and the HEAL Africa Hospital in May 2007.

“The violence perpetrated against women there, and scale of damage that Eve saw firsthand was horrific.

“In partnership with women survivors, Christine Schuler-Deschryver, and Unicef, V-Day initiated a Congo campaign, of which a main goal was to create the City of Joy, a concept which women survivors conceived.

“Developed by women on the ground in partnership with V-Day and the Panzi Fondation (DRC), the construction of the City of Joy started in September 2009. Doors opened in June 2011.

“Since 2007, a widespread global campaign in support of the women of Congo has been harnessed by V-Day activists, keeping a sustained media focus on the issue and raising much needed funds for the immediate needs of communities on the ground in the Congo.”

From the About page on the City of Joy website:

“The City of Joy is a transformational leadership community for women survivors of violence, located in Bukavu, Eastern Democratic Republic of Congo (DRC).

“Conceived, owned, and run by local Congolese, the City of Joy has flourished since it first opened its doors in June 2011, healing women from their past trauma through therapy and life skills programming while providing them with the essential ingredients needed to move forward in life – love and community.

“Serving 90 survivors of gender violence aged 18 to 30 at a time, City of Joy is now in its 6th year of operation and has graduated 759 women leaders in nine classes.”