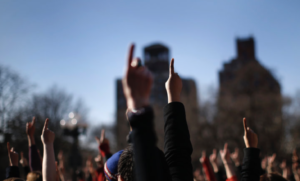 Women raise one finger to the air as part of a “One Billion Rising” rally in New York City’s Washington Square Park, February 14, 2013.

Eve Ensler of One Billion Rising has re-written an essay she wrote in 2012 that the Huffington Post ran. In the new post she says, “I am over rape.”

I wish we were.

Archangel Michael in his Plea For Peace Now Meditation has the answer.

He says what it takes is (1) us claiming our creator selves in sacred union with them, the Higher Realms — as above so below, as within so without — and (2) deciding right now:

Can we forgive everything as “an act of Love”?

Can we forgive ourselves — as victims and as perpetrators — and then move on, detach from the pain?

For the last two and half years I have been asking for apologies and apologizing for unconscious behaviour, within and without.

Not exactly easy, but this is what has need to be done.

Individually, as we take responsibility — response-ability — for what has happened here, we affect the whole.

When we delve into our sorrow, anger, and fears, feel to heal, come to know the actions that can be taken and take them, including being in a place of gratitude for everything, we can move on.

Join me and many doing this. We can be over rape.

Eve Ensler: Over It Redux*

I am over rape.

I’m over women (cisgender, transgender and gender non-conforming) having to tell our stories over and over, traumatizing and re-traumatizing ourselves over and over when the stories and names and identities of perpetrators remain protected and anonymous.

I am over rape culture, where privileged men with political and physical and economic power take what and who they want, when they want it, as much as they want, any time they want it.

This would include the super Predator in Chief, Donald Trump, who was elected after bragging about grabbing women’s pussies without their consent and who has more than 15 charges of abuse against him. Harvey Weinstein, Bill Cosby, Roger Ailes, Bill O’Reilly… the list is endless. It’s not enough to fire them and have them walk away with millions. Sexual abuse is already illegal.

I am over how long it takes for anyone to ever respond to rape, and how long corporations and partners protect abusers through payouts and backroom deals. If that same president or CEO stole money from you or killed someone, you can bet they’d be fired on the spot and he would be charged in court.

I am over the three out of four women who experience sexual harassment feeling they can’t tell anyone for fear of losing their job or not being believed.

I am over women being slowly made insane and angered and humiliated and shamed by being forced to ignore, deny, block out, tolerate, minimize the sexual harassment in order to survive.

I am over “33 million U.S. women being sexually harassed, and 14 million sexually abused, in work-related incidents,” as reported by ABC News-Washington Post.

I am over domestic workers being held as sex slaves.

I’m over non-documented workers being sexually and physically abused, and then having no place to turn for protection or justice.

I am over room attendants in hotels having to fight to get panic buttons installed on their beings because they can hardly bend over to clean a bathtub without fear of being attacked by male guests.

I am over restaurant workers being made to tolerate being grabbed, insulted degraded and harassed at jobs because they are reliant on tips and paid $2.13 an hour.

I’m over 76 percent of nurses being verbally assaulted and kicked, punched, bitten, grabbed or attacked by their patients or visitors on the job.

I am over 60 percent of women farm workers suffering sexual abuse, so much so that their place of work has been named the field de calzon, the field of panties.

I am over the hundreds of thousands of women in Congo still waiting for the rapes to end and the rapists to be held accountable.

I am over the thousands of women in Bosnia, Myanmar, Pakistan, South Africa, Guatemala, Sierra Leone, Haiti, Nigeria, Afghanistan, Libya, Syria, Iraq, you name a place, still waiting for justice.

I am over one in three women in the U.S military getting raped by their so-called “comrades.”

I am over the fact that half of all transgender people and lesbians will experience sexual violence.

I am over the fact that 75 percent of women in prison “have histories of severe physical abuse by an intimate partner… and 82% suffered serious physical or sexual abuse as children” and they are being further punished rather than healed.

I’m over college campuses being places young women survive rather than places they thrive because of rape culture.

I am over the forces that deny women who have been raped the right to have an abortion.

I am over rape victims becoming re-raped when they go public.

I am over women still being silent about rape, because they are made to believe it’s their fault. Because they did something to make it happen like “wearing the wrong clothes.” Because they are terrified they will get fired or won’t get the part or ever work again.

I’m over women being forced to leave their homes when their husbands beat them.
I am over violence against women not being a number one international priority when one out of three women will be raped or beaten in her lifetime ― the destruction and muting and undermining of women is the destruction of life itself.

No women, no future, duh.

I am over the endless resurrection of the careers of rapists and sexual exploiters ― film directors, world leaders, corporate executives, shamans, priests, rabbis, imams, gurus, coaches, doctors, movie stars, athletes (insert here)  ― while the lives of the women they violated are devastated, often forcing them to live in social and emotional exile.

I’m over listening to a predator who has slept with and then married his step daughter expressing his empathy for a mutual predator.

I am over years and years of being over rape and rewriting and updating this piece Over It.

I am over being polite about rape. It’s been too long now, we have been too understanding. We need it to end now.

We need people to truly try and imagine ― once and for all ― what it feels like to have your body invaded, your mind splintered, your soul shattered.

And really deeply, truly, I am over the passivity of good men. Where the hell are you? You live with us, work with us, make love with us, father us, befriend us, brother us, get nurtured and mothered and eternally supported by us, so why aren’t you standing with us? Why aren’t you driven to the point of madness and action by the rape and harassment, degradation and humiliation of us?

Why aren’t you rising in droves, going beyond apologies and confessions, realizing this issue is your issue not ours? Why don’t you see yet if you were to stand as one fierce band of insistent, consistent, loving men speaking to your brothers, calling out your brothers, interrogating yourselves, dismantling patriarchy in every board room, audition hall, hotel, hospital, office, farm, school, locker room, this whole thing would change overnight?

There are approximately one billion women on the planet who have been violated.

Can we rise together? Can we change the paradigm? Can we rebirth the culture because we know that when women are free, safe, equal and allowed to be alive in all their intensity the whole story will finally change?

*A version of this essay was published in The Huffington Post in 2012 and has since been updated.

I invoke the Divine Mother, Archangel Michael, Sanat Kumara,
and the Universal Laws of Intent, As Above So Below, As Within So Without,
Balance, Change, Attachment and Detachment, Transmutation,
Instantaneous Transmission and Transformation, Dispensation,
Attraction and Repulsion, Elimination and Completion and Continutity
for all issues of rape.

The Rise of ‘The Weinstein Effect’

Elephant Journal, Clara Hall: A Response to the Reader Comment about Raping Me